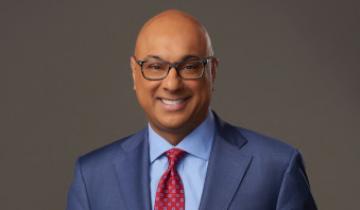 As part of the year-long Stauffer@25 celebration, the Queen's University Library is hosting a Stauffer@25 Speaker Series that explores Indigenous topics and themes, as well as the evolution of the library's knowledge environment in the context of equity, diversity, and inclusion. The Speaker Series is generously funded by the Stauffer Foundation.

The third and final speaker in the series is acclaimed journalist and alumnus Ali Velshi (Artsci’94, LLD’16), who will give a lecture titled The Pursuit of Truth in a Post-Fact World.

Velshi graduated from Queen’s with a degree in religious studies in 1994, the year Stauffer Library opened. Born in Kenya and raised in Canada, Velshi has worked for several international media organizations, including Al Jazeera and CNN. He is currently an MSNBC anchor and business correspondent with NBC News, and recently launched his own weekend show, Velshi, on MSNBC. In 2016, Velshi was awarded an honorary doctorate from Queen’s.