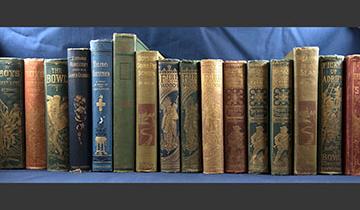 Collection Type:
Location:
W.D. Jordan Rare Books & Special Collections
Special Collection:
Yes
James De Mille (1833-1880) was a professor of history and rhetoric at Dalhousie College and a late 19th century popular Canadian author. His novels were published serially in American magazines like Harper's Bazaar and then later published as books in New York or Boston. De Mille wrote mostly adventure novels. His most popular and famous work is A Strange Manuscript Found in a Copper Cylinder, published posthumously in 1888. Like Thomas More's Utopia, A Strange Manuscript Found in a Copper Cylinder is the narrative of the experiences of Adam More, a British sailor shipwrecked on a forgotten island in Antarctica inhabited by the Kosekin who reject wealth and whose society is a reveral of 19th-century values. Four other sailors find More's manuscript in the cylinder providing a frame for the narrative. The books themselves provide an excellent study of late 19th-century publishing practices, especially publisher's bindings.

Our locations hold physical resources in many disciplines, including an impressive array of rare books and special collections.